Through the Gates of the Silver Key

Through the Gates of the Silver Key

At this reply the Guide seemed to make a sign by certain motions of his robe which may or may not have involved the lifting of an arm or some homologous member. A second sign followed, and from his well-learned lore Carter knew that he was at last very close to the Ultimate Gate. The light now changed to another inexplicable colour, and the shapes on the quasi-hexagonal pedestals became more clearly defined. As they sat more erect, their outlines became more like those of men, though Carter knew that they could not be men. Upon their cloaked heads there now seemed to rest tall, uncertainly coloured miters, strangely suggestive of those on certain nameless figures chiseled by a forgotten sculptor along the living cliffs of a high, forbidden mountain in Tartary; while grasped in certain folds of their swathings were long sceptres whose carven heads bodied forth a grotesque and archaic mystery. Carter guessed what they were and whence they came, and Whom they served; and guessed, too, the price of their service. But he was still content, for at one mighty venture he was to learn all. Damnation, he reflected, is but a word bandied about by those whose blindness leads them to condemn all who can see, even with a single eye. He wondered at the vast conceit of those who had babbled of the malignant Ancient Ones, as if They could pause from their everlasting dreams to wreack a wrath on mankind. As well, he might a mammoth pause to visit frantic vengeance on an angleworm. Now the whole assemblage on the vaguely hexagonal pillars was greeting him with a gesture of those oddly carven sceptres and radiating a message which he understood: "We salute you, Most Ancient One, and you, Randolph Carter, whose daring has made you one of us." 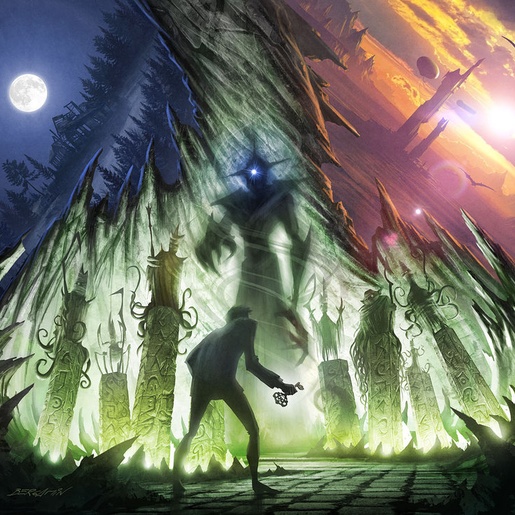