In about two hours the boat rested in a paved plaza close to the rocky wall of the valley. On one side I could view the entire city as it sloped from the plaza down to the old river-bank; on the other side, in startling proximity, I was confronted by the richly ornate and perfectly preserved facade of a great building, evidently a temple, hollowed from the solid rock. Of the original workmanship of this titanic thing I can only make conjectures. The facade, of immense magnitude, apparently covers a continuous hollow recess; for its windows are many and widely distributed. In the center yawns a great open door, reached by an impressive flight of steps, and surrounded by exquisite carvings like the figures of Bacchanals in relief. Foremost of all are the great columns and frieze, both decorated with sculptures of inexpressible beauty; obviously portraying idealized pastoral scenes and processions of priests and priestesses bearing strange ceremonial devices in adoration of a radiant god. The art is of the most phenomenal perfection, largely Hellenic in idea, yet strangely individual. It imparts an impression of terrible antiquity, as though it were the remotest rather than the immediate ancestor of Greek art. Nor can I doubt that every detail of this massive product was fashioned from the virgin hillside rock of our planet. It is palpably a part of the valley wall, though how the vast interior was ever excavated I cannot imagine. Perhaps a cavern or series of caverns furnished the nucleus. Neither age nor submersion has corroded the pristine grandeur of this awful fane - for fane indeed it must be - and today after thousands of years it rests untarnished and inviolate in the endless night and silence of an ocean-chasm. 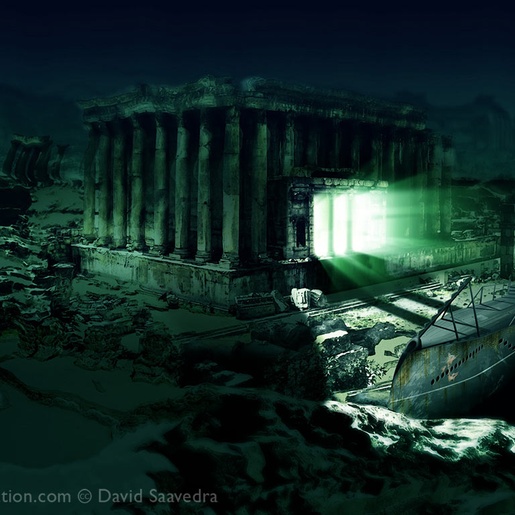